The Keyhole Hotsprings are located about 40 or so km north of Pemberton. The trail itself is a nice 2km’s, but the logging road to get there is long and grueling. Potholes galore! 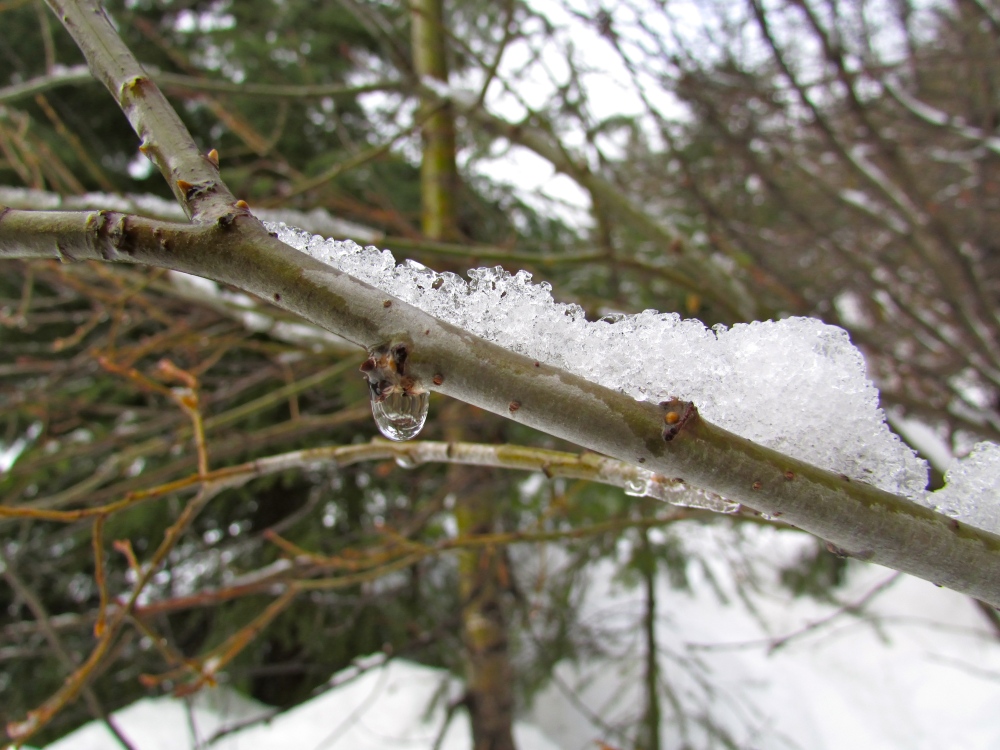 The original plan was to hike up to Joffre Lakes and spent a night there before the hotsprings the following day. Due to Avalanche warnings in the area, we were turned away, leaving us with only the hotsprings. Worked for me! 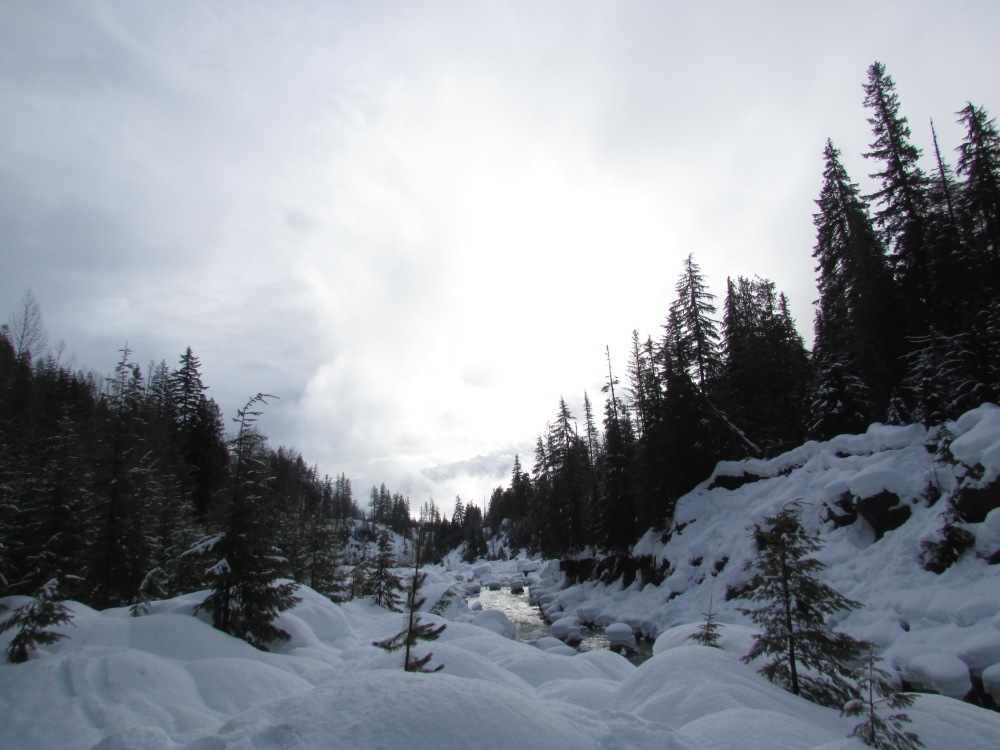 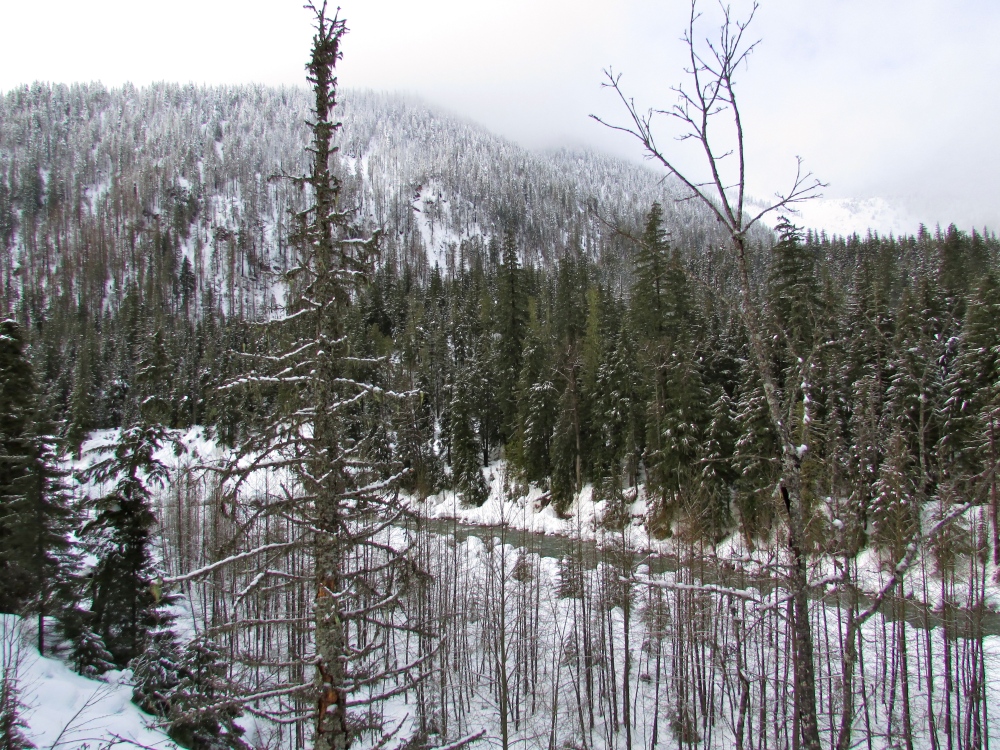 If you do decide to hike to the hotsprings in the wintertime, be sure you wear either snowshoes with good grip or mircospikes. An optional – but heavenly savior- item to bring are hiking poles. There are two incredibly steep sections to climb, and with the slushy-ish snow getting softer by the minute, these poles saved my life a few times. If you’re looking for some good microspikes, I bought these ones at Mountain Equipment Co-op. 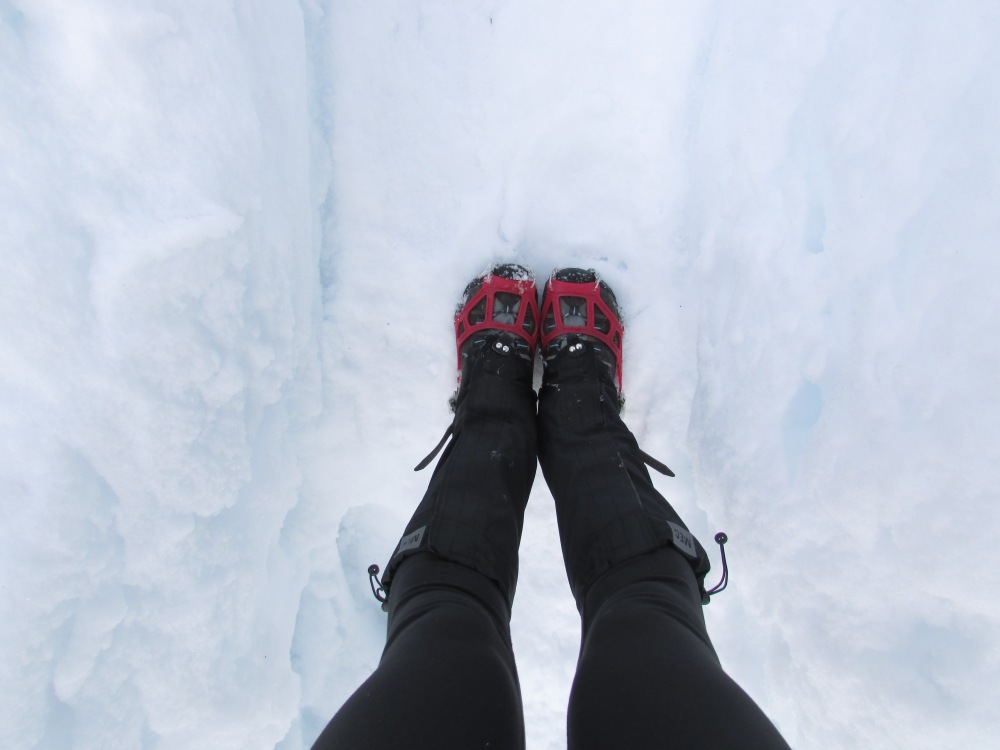 The entire trail situates you right along the Lillooet River. With all the accumulating snow throughout the season, the boulders sitting in the river looked like massive marshmallows. 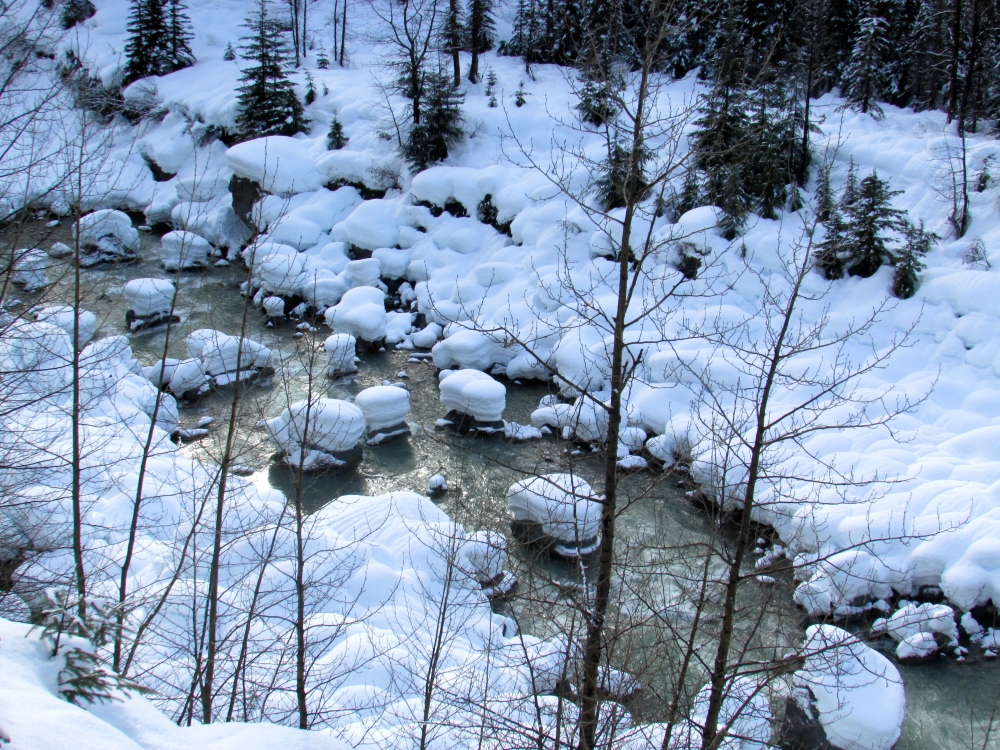 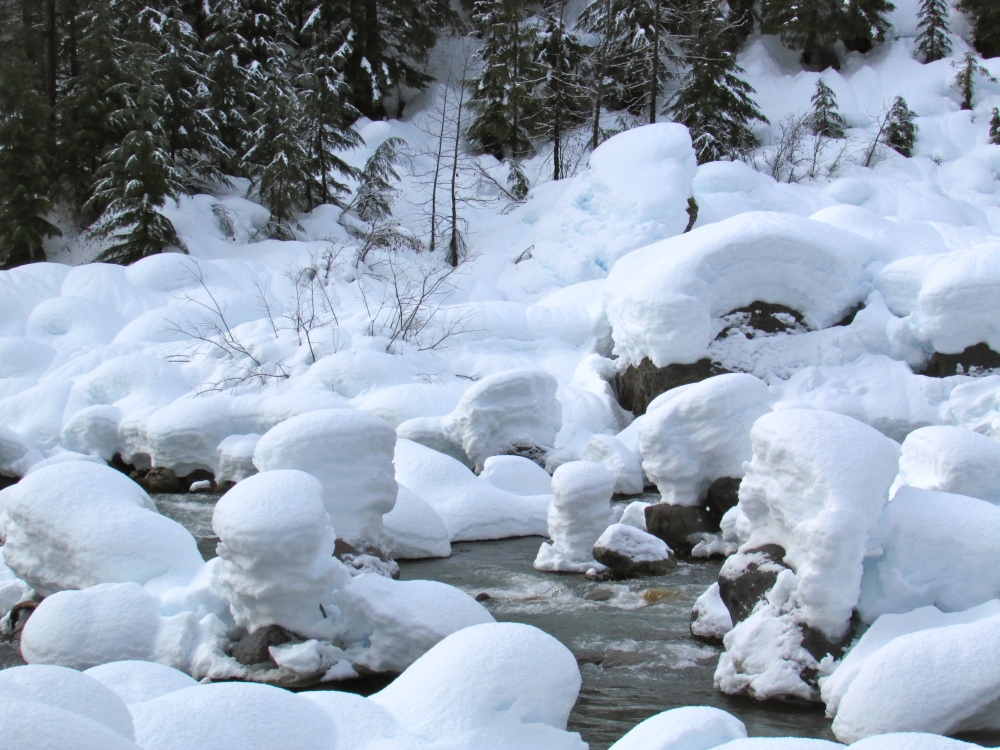 The first (and largest) campsite comes into view after 2km. From what I saw (and this was during winter camping season) there looked to be about 6 or so tent spots; already flatten out from previous campers. If you want to try your luck and snag a tent spot right by the hotsprings, continue a little farther on the trail. Once you reach your first fork, take the trail that veers left towards to the river.
The hotsprings are incredibly beautiful. We only got to the first ones (which you see in all the photos). Since it was a Saturday, the crowds came in and eventually there were about 20 people. If you come during the week in the wintertime it probably won’t be as busy. I’ve also heard that the numbers slow down in the summer too (because they are so damn hot!) 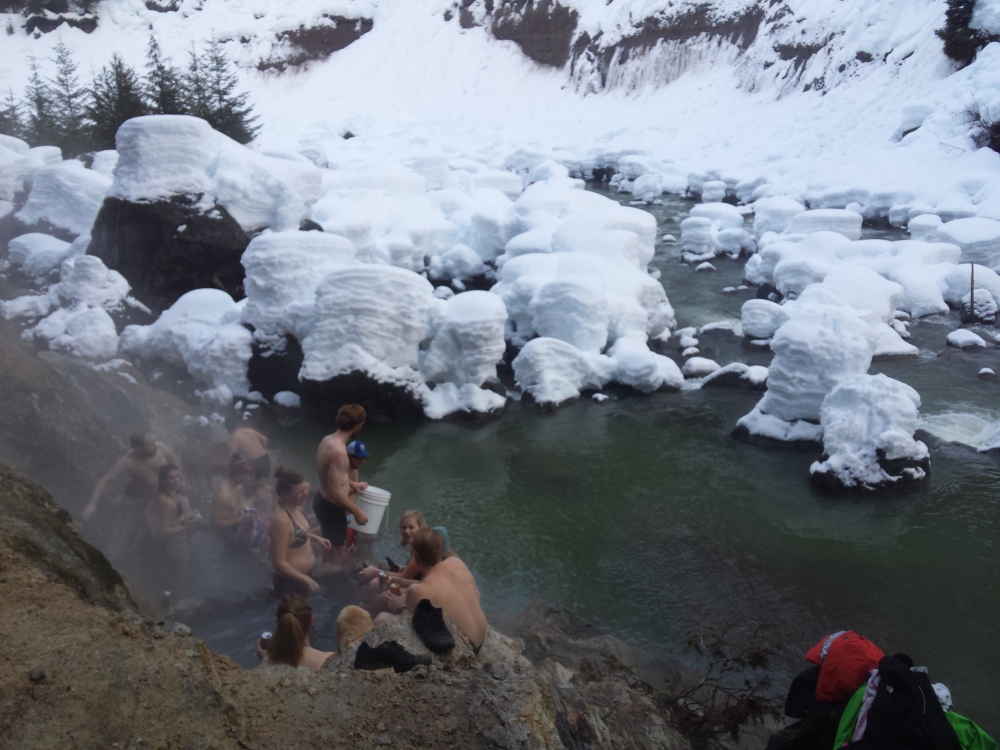 There is a white bucket beside the pools specifically to throw cold Lillooet River water into the springs. Everyone who’d be sitting in the pools would walk out with a half-red body. There were some brave souls who would dip themselves in the river to cool off (I being one of them!). My body was so hot I could hardly feel the freezing twinges of the water.

We spent about 4 and a half hours in the hotsprings. I was a steamy, soggy prune by the time we left. I’m not exaggerating when I tell you I fell asleep at 7: 35pm. The following morning we work up a 10:20 am. 15 hours of sleep! 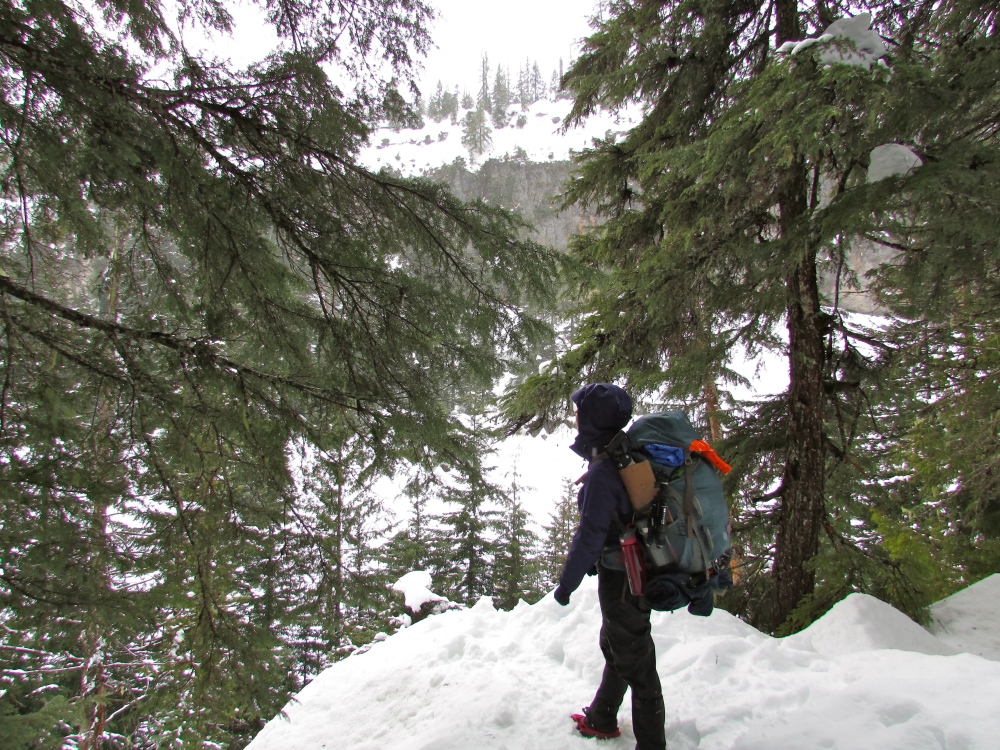 The hike back had it’s moments. For the most part is was easy sailing until you reach those steep parts you climbed up initially. I almost died, folks. Just as we were approaching the first hill, I already had a feeling this wouldn’t end as smoothly as I hoped. I was the first to descend – I wanted to test it out for my two other friends behind me. I adjusted my poles and began transversing my way down. I could see a couple at the bottom waiting for us to get down before they headed up. About 4 paces in, my microspike lost grip in the slush and before I knew it I was sliding down with my 40 pound pack down a 20 foot slope. While tumbling down to my potentially imminent death, you would think I would be worried about running into a tree. No. I was more concerned about where my hiking poles were at the time, and that they wouldn’t turn me into a human kabob once I reached the bottom.

So while my arms were flailing and my voice was awkwardly blaring, I suddenly came to a stop. I have to thank the massive ice block that brought my side to a halt. Actually, more like the left side of my face.

I stood up, and tried to keep my cool. The couple was standing about 7 feet away. They asked me if I was OK, and offered to help me up. I kept my smile on while I thank them and told them I was perfectly fine *denial mode on* – when really in the inside I was thinking “HOLY F*CK.” I could already feel a lovely chipmunk cheek brewing away. No bones were broken and only a little blood shed – the perfect injury I’d say. 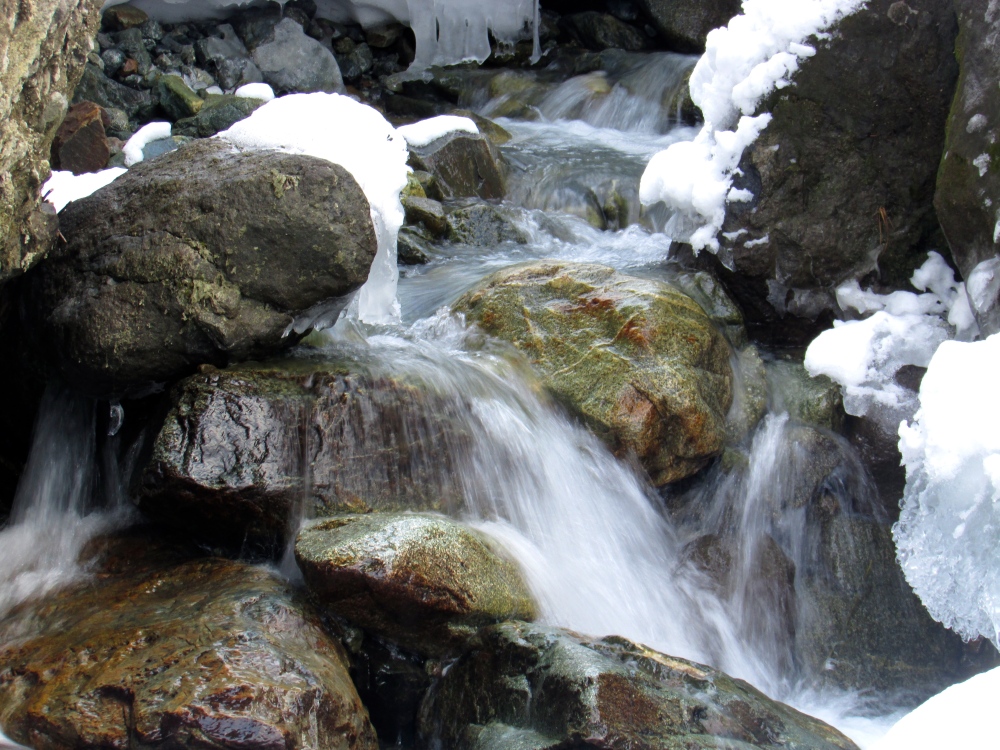 Now, don’t be afraid of my story here. Honestly, I should have taken off my pack and slid it down the slope before I started my descent. It was just unfortunate that I had to learn the hard (and painful) way. I’m sure you will know better, and make a better decision than I did :)

So, If you want a 200 dollars worth spa experience, head to these hotsprings. There is plenty of sand to exfoliate with, and the best hydrotherapy anyone could ask for. If you don’t mind sharing pools with a couple people and asking a stranger to rub your back, you could be in for a real, unique spa getaway!