The beautiful Joffre Lakes are located just outside of Pemberton, British Columbia. Its serene beauty will take you away. For years, Joffre Lakes has been a dream backpacking trip I’ve wanted to do. Finally, I was able to experience trek it along side two amazing co-workers. The last backcountry camping trip I had done was about a month and a half ago. It was safe to say I was getting “work cabin fever.” I needed to get outside!

This majestic park is around 1500 hectare of forest, lakes, waterfalls and glaciers. It’s three glacial-fed lakes are what it’s known for. The trail that takes you through the park stretches a total of 5.5 km. You can easily loose yourself staring into the turquoise abyss. It’s crazy how something so natural could create a colour so surreal, and it seems to get more blue the higher you go! Joffre Lakes Provincial Park is just north of Garibaldi Provincial Park where I’ve had the chance to do other memorable trips like Elfin Lakes. When driving to Joffre, it takes about 3 hours from Vancouver and around 45 minutes or so from Whistler.

All working in healthcare, the three of us weren’t too bothered to leave Vancouver at 5 am to head up to Pemberton. Getting an early start was a goal of ours. We knew we wanted a good spot to camp at upper lake. We got to the trail head around 8:30am and started our ascend. When you begin the hike, the lower lake approaches you in the first two minutes. Take a few snaps of this amazing blue and keep on going — it only gets better.

If you’ve hiked this trail before, you’d understand me saying the climb from the lower to middle lake is a total bitch. It’s nothing deadly, but it sends a “wake-up call” to your quads right off the bat. This part of the trail is the most open, and allows you to capture a nice view of the valley you’re in.

If you Instagram or google “Joffre Lakes,” majority of the images captured were those taken at middle lake. Here, you’ll find the rope swing and famous sunken log. We all took off our boots and individually climbed on the log for the obligatory shot. When I started to walk out, the wind began to pick up almost causing me to go in. No way in heck was I going in. It the weather was a bit warmer, I would have totally taken the swing rope in. Next time!

We stopped at middle lake and devoured our tasty snacks: Jerky, Eggs, and Jungle trail mix!

Our ascend continued — the final stretch! You’ll notice there isn’t much elevation gain between the middle and upper compared to the lower and middle. Phew! After a few bridge crossings, upper lake will come into view. It’s pristine aqua blue colour literally makes you pinch yourself. It’s insane. At this point, you are sitting at around 1500 meters in elevation.

We snagged a spot right by the lake and quickly set up tent. The rain was coming so we piled on in the tent and did what anyone would do camping — snacked more and napped. After some R&R, we decided to climb up to Matier Glacier.

Looking up from the lake, you will see the monstrous ice pack. Montier Glacier towers and stares down on you. You thought it was beautiful looking from the lake! Well, I tell you, go that extra mile and go right up to it! It was a trek up (about an hour and a half-ish) but was it ever a cool experience. At the base of the glacier you’re situated about 1800 meters above sea level. Looking around you can see the peaks of Mt. Matier, Mt. Spetch and Joffre Peak.

After some memorable kodak moments, we began out descend back to base camp. Another nap was on the agenda, followed by good ol’water filtering, dinner and of course well deserved beer-time! Before the trip, I popped over to MEC and picked up some yummy dehydrated Pad Thai. As you can imagine, we devoured that goodness. 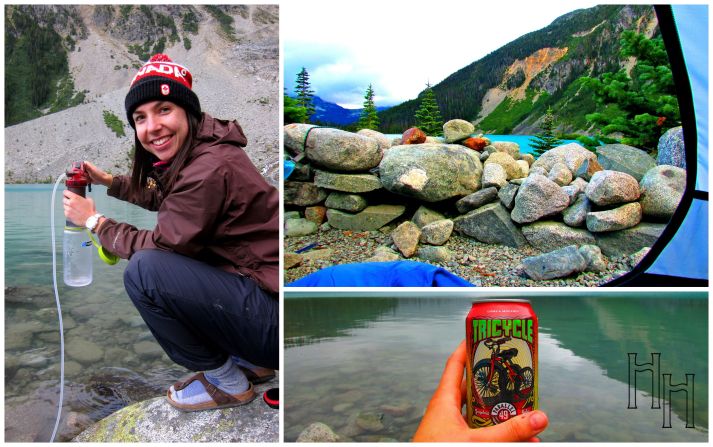 Knowing we were to pack up the next day around 9, we hit the hay around 10.

7:30 am, nice and early. We woke up to overcast – the rain was coming. As soon as our packs were on our backs, the rain began. Luckily, majority of the trail is undercover. It only took us a little less than an hour to hike back to the trail head (my knees were cursing half way down).

We passed at least two dozen folks making their way up — it was a good idea to take the friday off, we definitely beat the crowds! On the drive back to Vancouver, we stopped in Pembie for a picnic lunch. The original plan was to pop by the Pemberton Hot Springs, but the main road was closed due to forest fires. Instead, we made a quick stop at Alice Lake for a plunge!

Joffre Lakes beholds it’s own unique beauty. You’ve really got to see this place for yourself. You’ll get the full-on goose bump experience. Do me the favour, and if you’re ever near Whistler, take a day trip and hike Joffre Lakes! For now, check out this short 2 minute movie I put together that includes some of the highlights from this trip!

Have you ever hiked Joffre lakes? Suggest any other trails like this one? Let me know in the comments below! I’d love to know!

~ All Ideas and Shenanigans are Property of hiatushunnie.com ~