Joshua Tree National Park located in southern-mid California consists of 794,000 acres of protected beauty. The Park itself is situated right where the Mojave and Colorado Deserts converge. I think the park’s authenticity come from it’s biological diversity between the two deserts. They are both incredibly unique and are home to it’s own kind of plants and animals. I was lucky enough to have been able to experience both yesterday.

The day before I left, I spent an hour or so reading multiple travel blogs on this National Park. I was especially interested in articles that talked about seeing Joshua Tree Park in 5-6 hours (since that was all the time I could fit in). Turns out, it was definitely possible to see a few of the major sights in that time span! 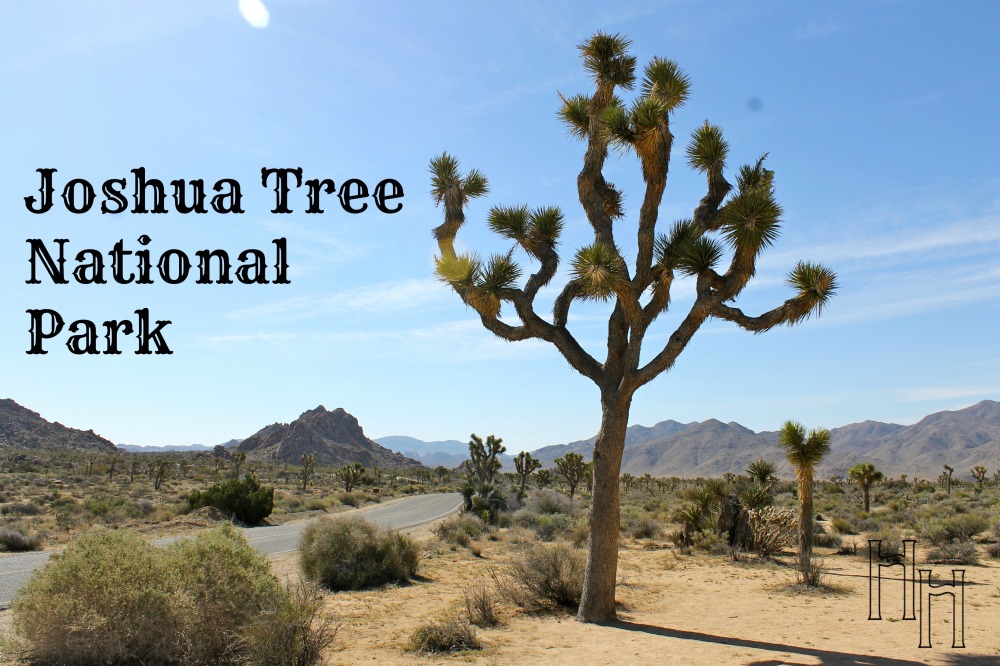 A Little History on the Tree…

The Joshua Tree was known as the “tree of life,” to the Chemeheuvi People. Native to the Mojave Desert, It was a universal and much valued tree to them. Like the cedar tree, its fibers would be used to weave mats, sandals and baskets. From an animals perspective it still is a beloved resource for shelter, and food for creatures such as the ladder-backed woodpecker, the western screech owl, and the antelope ground squirrel.

For those fellow U2 Fans, this was the tree they named their 1987 hit “The Joshua Tree,” after. (rock on)

My Day in a Nutshell

The morning started off early (as per usual). We had a 40-45 minute drive north of Palm Springs. You take the number 10 for a while until signs signalling you towards Yucca Valley come into view. The drive from Yucca not only takes you into the park, but up 4000 feet above sea level. While you ears pop, you can take in the stunning views, which includes the dramatic change in rock formation. From Yucca, signs will direct you to Joshua Tree. There is a great info centre there that provides you with maps, water and glorious booney hats (really wish I bought one to really fit in). Rangers also work inside that give you the scoop on what’s best to see depending on all sorts of things: fitness level, age, and simply what you’re interested in seeing.

Once all mapped and watered-up, there is one road and one road only that takes you into Joshua Tree Park. The drive starts off kinda barren, and then all of a sudden it’s like you went back in time and are now driving through a western movie set. The rocks are amazing. With eons of erosion, these HUGE granite borders have become so neatly, and strategically stacked (as if they were placed on top of each other by giants). 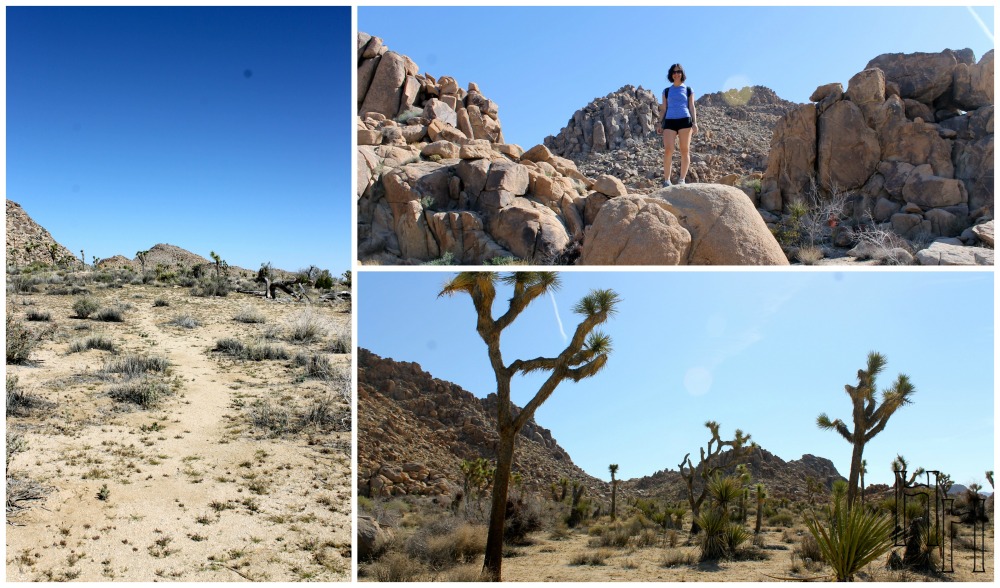 Hundreds upon hundreds of Joshua Trees greet you as you drive through the first part. The tree itself reminded me of something out of a Dr. Seuss book (like the ones from the Lorax). Up close they have sharp, spiky thorns as leaves (nothing too friendly to touch). Other than the glorious Joshua tree’s in sight, there are many signs that direct you to the main sights. 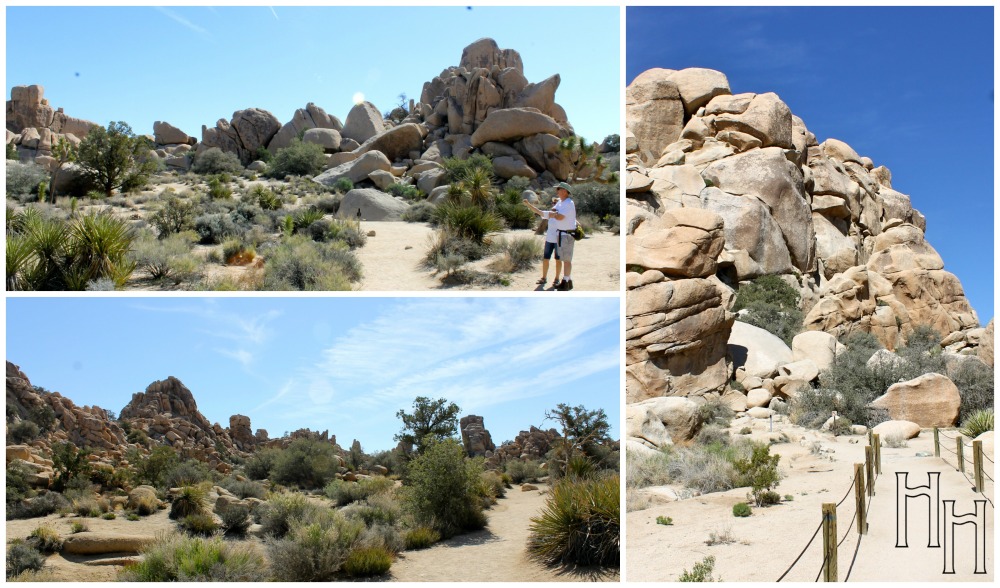 One of the first hikes the Ranger mentioned was the short 1 mile Hidden Valley Trail. This valley acted as a legendary cattle rustler’s hideout. Pretty cool if you’d ask me. The hike itself was incredibly peaceful and brought solitude. The trail is a loop circuit, so you’re actually walked around inside this enclosed “valley.” The huge rock faces block out the noise of passing cars. In my head the entire hike, I was strategically scouting out where you could exactly hide a cow (my mind is weird, I know). Turns out I was able to find a whack of places a cow could call it safe in desperate times.

Walking the dusty trail, It’s pretty dead silent except for the odd hoot from a screeching owl. I would look up to cloudless skies and the scorching sun. Sometimes I’d catch a sight of a red-tailed hawk eying the ground for lunch. On the ground to the sides of the path are colourful blooming cacti such as the beavertail and prickly pear. Though I saw no snakes on this hike, **cough – keep reading – cough,** my eye caught scurrying desert iguanas as they crossed my path. Native plants to the Mojave such as the Yucca and juniper mosaically grow throughout the enclosed valley. 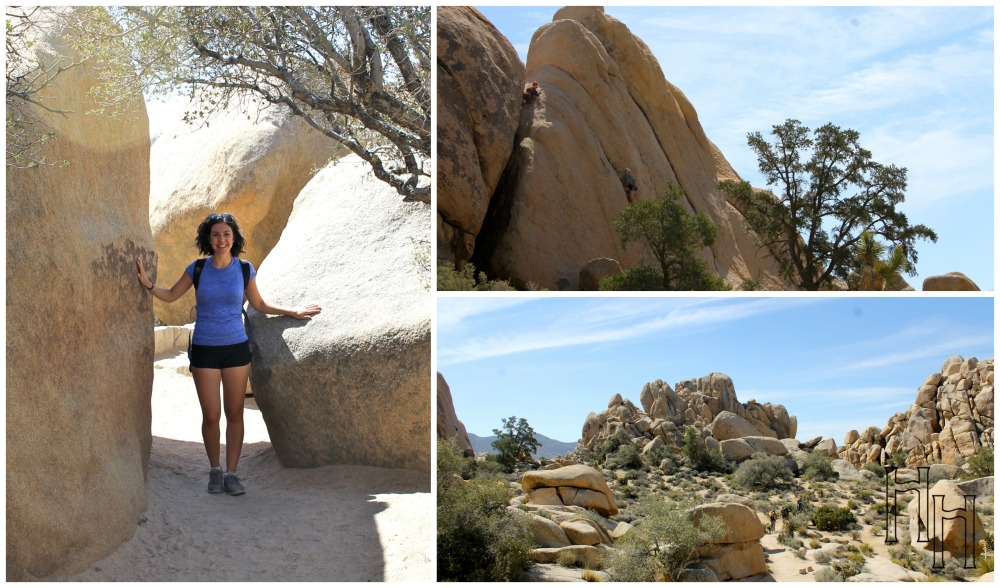 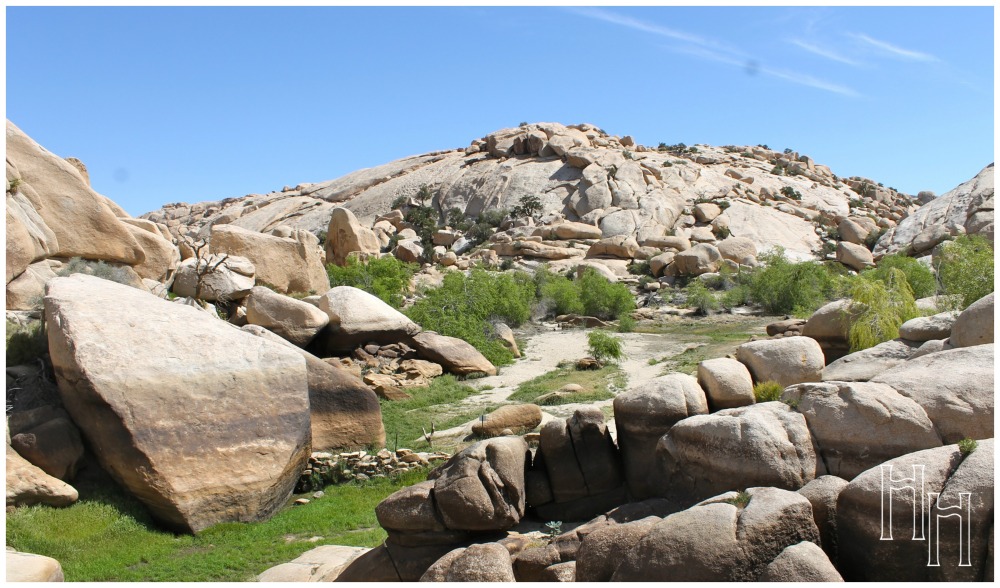 From the Hidden Valley we continued on to the next spot they recommended, The Barker Dam. With a mere length of 1.1 miles, it again takes you on a loop circuit. This time you are able to hike to a “dried up” reservoir and the old barker dam itself. The Dam was apparently built around 1900 to hold water for cattle and mining use. There was a tiny pond of water still going strong, but I wouldn’t be surprised if it disappeared by next week. Beside the dam was an old water holder where cattle would stop to grab a gulp of water.

Passing the dam leads you into an open valley of dried-ness before reaching the oh-so-cool petroglyphs!! I have to break it to you though, earlier at the info centre, the ranger we were speaking to told us the unfortunate news. A long time ago, before this Park was totally protected, Disney came in and re-did the paintings on top of the original Petroglyphs for a movie (i could NOT believe it!) So the pictures I have of them are obviously of the “new” paint (which is why they are so visible, bright and fake looking). Anyways, deep down I could imagine what the initial ones looked like and was in serious “aweh” of the whole thing. I am SO living in a western movie right now. 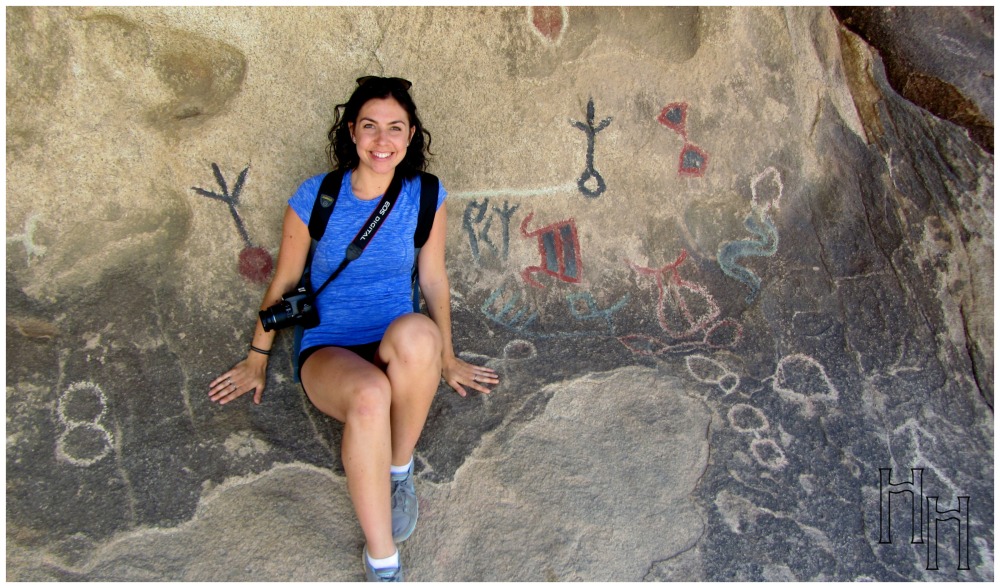 Driving to Keys View takes you another 1700 feet above sea level. It’s the highest point of the park which makes for spectacular views. I was so high up, I was able to see the coachella valley, the Salton Sea AND the San Andres Fault –crazy!! Though, because of the smoggy-ness that day, I couldn’t get those “blue sky” shots.

I did however manage to encounter yet again, ANOTHER snake. I must be a snake whisper or something. I hate to break the bad news, but it wasn’t a rattlesnake this time. It looked to me like a garter snake – like the ones we have at home. At the time,  I wasn’t 100% sure of the ones native to the Mojave Desert. Anyways, it was curled up half inside a kangaroo rat hole so I had no idea it’s size was. Turns out it was a good meter of snaky-ness (ack!). 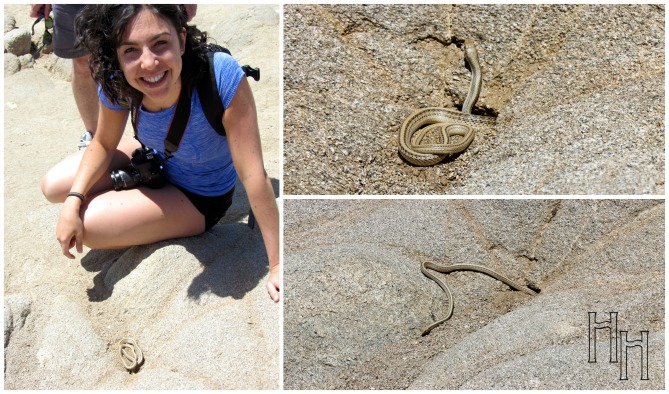 Driving through the entire park makes for a beautiful 65 mile drive and I definitely recommend it. After officially leaving the Mojave Desert, the Colorado Desert is there with open arms. Just before we geographically left the Mojave, there were a of couple cool little stop-and-see things left — like the jumbo rocks!

Just as you’re about to head south there are “exhibit ahead” signs that direct you to a couple of cool sightings such as the Jumbo Rocks. Mentioned earlier, over time the granite rocks have eroded to form these cartoon-like structures. These jumbo rocks are just like that, but seriously “jumbo.” Given that I’m a child at heart, I got my climb-on and hurdled myself over and around a few boulders – natures parkour at its finest. They’re a sweet sight to see. I felt incredibly small and insignificant standing beside them. 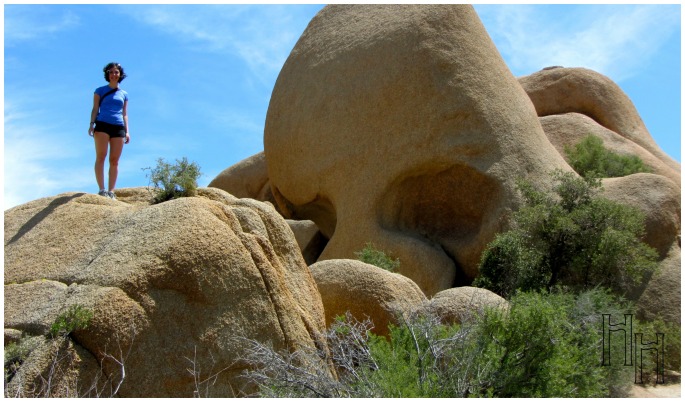 Not even joking, about 500 meters down the road comes skull rock. You know it’s ahead because of all the parked cars to the side of the road. The “rock” is visible from the road, but if you want to walk up to it, it’s a short few feet. This was the picture of me in one of my latest Instagram photos (for those who were trying to figure out where I was in the picture!). It’s insane how the granite was eroded over time to form not one, but two eye sockets.

The last two “picture spots” we pulled over for were the cholla cactus gardens ocotillo patch. These two sights are situated in the Colorado Desert. You know this by looking around to see no more Joshua trees. The tree is only native in the Mojave desert – No border signs necessary! Driving directly south through the park, you’ll automatically know you’ve reached the Cholla Cactus Garden because for miles on either side of the road are hundreds of these bizzard looking plants. They look really soft and fluffy from a distance, though up close look incredibly evil. 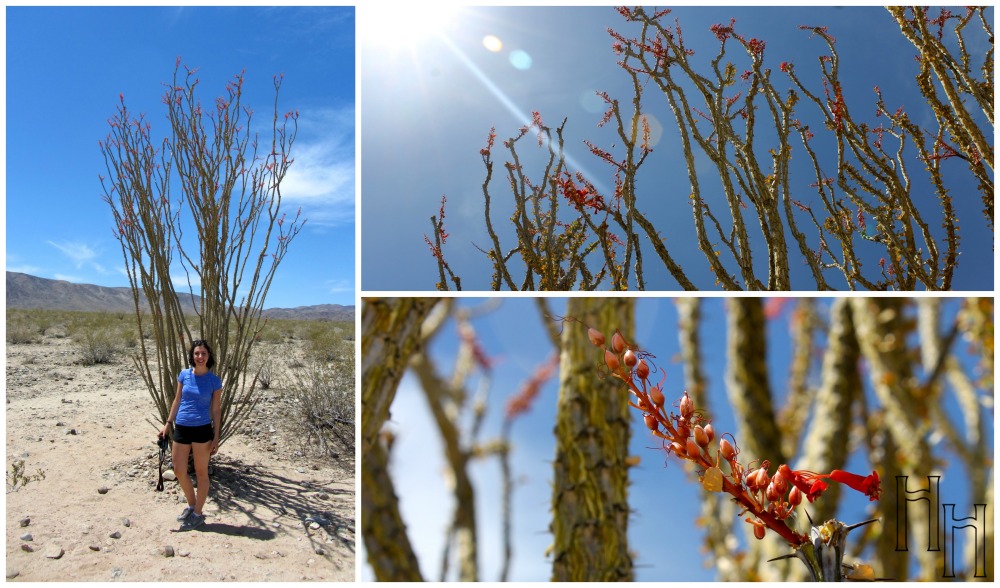 A mile or two down the road you approach the Ocotello Plain. Again, you know you’ve entered the territory because there are copious amounts of them. They also, look like something from a Dr. Seuss book.

I was pretty impressed on the amount I was able to see and do in a span of 6 hours. Joshua Tree National Park definitely had it’s differences compared to when I hiked Fern Canyon last week. Though, both were equally beautiful to experience. To be honest though, I only got to experience maybe 10% of Joshua Tree. Turns out there are multiple campsites you can stay at for cheap and dozens of more strenuous hiking trails to do. Next time for sure, I will be a fellow camper here. I want to spend a good week or two in this place. I can only imagine what the sky at night would look like.

I hope you enjoyed this read, and got through it without being too bored.

Have you ever been to Joshua Tree Provincial Park? Recommend another place like this to see? Leave it in the comments below!

~ All Ideas and Shenanigans are property of hiatushunnie.wordpress.com ~